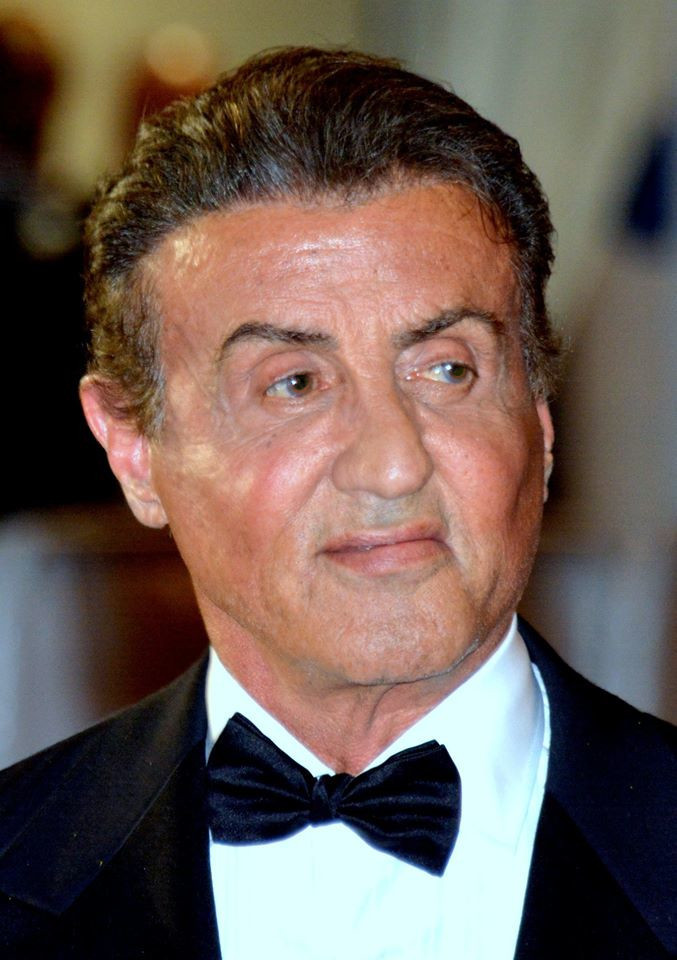 Sylvester Enzio Stallone (/stəˈloʊn/; born Michael Sylvester Gardenzio Stallone, July 6, 1946) is an American actor, director, producer, and screenwriter.[1] After his beginnings as a struggling actor for a number of years upon arriving to New York City in 1969 and later Hollywood in 1974, he won his first critical acclaim as an actor for his co-starring role as Stanley Rosiello in The Lords of Flatbush. Stallone subsequently found gradual work as an extra or side character in films with a sizeable budget until he achieved his greatest critical and commercial success as an actor, starting in 1976 with his self-created role as the boxer Rocky Balboa, in the first film of the successful Rocky series (1976–2018). In the films, Rocky is portrayed as an underdog boxer that fights numerous brutal opponents, and wins the world heavyweight championship twice.

In 1977, Stallone was the third actor in cinema to be nominated for two Academy Awards for Best Original Screenplay and Best Actor. Stallone’s film Rocky was inducted into the National Film Registry, and had its props placed in the Smithsonian Museum. Stallone’s use of the front entrance to the Philadelphia Museum of Art in the Rocky series led the area to be nicknamed the Rocky Steps, Philadelphia has a statue of his character Rocky placed permanently near the museum, and he was voted into the International Boxing Hall of Fame.

Up until 1982, Stallone’s films were not big box office successes unless they were Rocky sequels, and none received the critical acclaim achieved with the first Rocky. This changed with the successful action film First Blood in which he portrayed the PTSD-plagued soldier John Rambo. He would play the role in a total of five Rambo films (1982–2019). From the mid 1980s through to the late 1990s, Stallone would go on to become one of Hollywood’s highest-paid actors of that area by appearing in a slew of commercially successful action films, but generally panned by critics. These include Cobra, Tango and Cash, Cliffhanger, Demolition Man, and The Specialist.

Stallone saw a decline in popularity in the early 2000s, but rebounded back to prominence in 2006 with a sixth installment in the Rocky series and 2008 with a fourth in the Rambo series. In the 2010s, Stallone launched The Expendables films series (2010–2014), in which he played the lead as the mercenary Barney Ross. In 2013, he starred in the successful Escape Plan, and acted in its sequels. In 2015, Stallone returned to the Rocky series with Creed, that serve as spin-off films focusing on Adonis “Donnie” Creed played by Michael B. Jordan, the son of the ill-fated boxer Apollo Creed, to whom the long retired Rocky is a mentor. Reprising the role brought Stallone praise, and his first Golden Globe award for the first Creed, as well as a third Oscar nomination, having been first nominated for the same role 40 years prior.